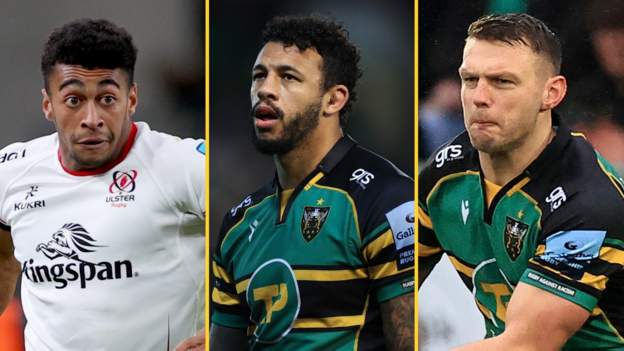 Wing Robert Baloucoune is back in the Ulster team for Sunday’s Champions Cup match against a Northampton side that includes Courtney Lawes and Dan Biggar.

Fit-again Baloucoune’s inclusion is among seven Ulster changes from the defeat by Munster.

Lawes’ selection is one of three Saints changes from the win over Newcastle.

Api Ratuniyarawa drops to the bench, after starting in the second row in the 44-8 win at Newcastle, with Litchfield replacing Fraser Dingwall.

Alex Mitchell and Biggar continue in the half-back berths for the fourth straight match as the Wales fly-half starts after not featuring in his team’s 27-22 defeat in Belfast last month.

Northampton director of rugby Chris Boyd will not be able to attend the match after being handed a two-game ban for criticising a referee after his team’s defeat by Saracens on 2 January.

Saints announced earlier this week that Boyd will step down from the job at the end of this season.

For Ulster, Nathan Doak replaces injured John Cooney at scrum-half with Baloucoune and Moore taking over from Craig Gilroy and Ben Moxham in the backs, as Hume is passed fit to start after a hamstring concern.

Props Warwick and Moore are drafted into the front row as Tom O’Toole drops to the bench and Jack McGrath is not included in the match day squad.

Treadwell and Rea also come into the Ulster pack with Sam Carter and Greg Jones relegated to the replacements.

A third successive pool victory would guarantee Ulster’s place in the knockout stages but while Northampton have lost their two opening European games, their Belfast display and last weekend’s thumping win over the Falcons will give them optimism for Sunday’s match.

Ulster wing Baloucoune, who made his Ireland debut in the summer and started in his country’s final autumn international against Argentina, sustained a shoulder injury in the Irish province’s impressive opening European win over Clermont Auvergne last month.

That ruled him out of the victory over Northampton a week later but the postponement of the festive fixtures against Connacht and Leinster meant that the only other game he was missed was the defeat by Munster.

“It’s never a good time to get injured but I suppose with those games postponed I didn’t miss out on too many games,” said the 24-year-old Enniskillen man.

“We were disappointed with the Munster result but I think we’ve made up for that with a good week of training.”