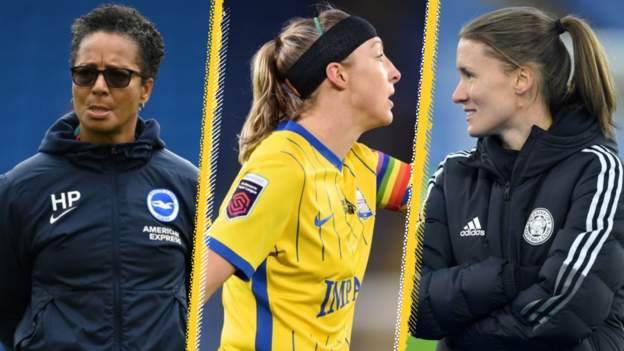 Birmingham City boss Darren Carter wants his side to “impose themselves” against league leaders Arsenal when the two sides meet in the Women’s Super League on Sunday.

The Blues remain without a win in the WSL and are bottom of the table.

But Carter, who took over in November, hopes his players will remain “positive” and try to exploit Arsenal’s weaknesses when in possession.

“I want us to attack games and impose ourselves,” he said.

“Every team has their weaknesses, of course. Arsenal are a team that play very expansive, are very good with the ball and rotate in the middle area of the pitch.

“But we think we can identify a few things that can pose them a question. They dominate games but there are times you can go at them. I will never be a coach or a manager that soaks up pressure.”

Birmingham will have at least one unnamed player out due to Covid, while defender Cecilie Sandvej had an operation over Christmas and is expected to return within a month.

Arsenal boss Jonas Eidevall said they also have players out with Covid issues, while Australian internationals Caitlin Foord, Lydia Williams and Steph Catley are unavailable as they prepare for the Asia Cup tournament.

“They have big belief and are a hard-working team so we go into this game without expectation. We have to be as prepared as possible so we can have a good start in this part of the season.”

‘They are still a quality side’

Brighton manager Hope Powell said her squad are “under no illusions” as to how tough Sunday’s game against Manchester City will be.

City are currently two points behind Brighton in the WSL table after a disappointing first half of the season.

“They are still a quality side with a depleted squad,” said Powell.

“Every player they put out is a high-calibre international so we’re under no illusions of what’s going to be presented to us even though they haven’t done as well. It’s going to be tough but we knew that anyway.”

Manchester City boss Gareth Taylor said they need to be at their best and praised Brighton’s “forward-thinking” ambitions.

“They have been slightly inconsistent in their results but they have established themselves as a team that has been forward-thinking on and off the pitch to make the push to that next level,” he added.

“You can admire what they are doing and the project they have going on. It’s happening more and more in the game now which is good. Players and clubs are really looking to step up to get themselves to that next level in the WSL.”

Manchester City and England captain Steph Houghton is among those starting to return from injury but is unlikely to feature – though Taylor did not rule her out.

City remain without goalkeepers Ellie Roebuck and Karen Bardsley and long-term absentees Chloe Kelly and Esme Morgan, but defender Lucy Bronze could be available after recovering from injury.

‘We’re going in the right direction’

Elsewhere, Leicester City travel to Reading but manager Lydia Bedford revealed Covid-19 has had an impact on player availability.

“We’ve still got a strong squad but I think like every team, people going home over Christmas has obviously put the squad at a greater risk than if we’d have stayed in training for two weeks,” she added.

“We’ve got what we need for the weekend but we have got a few players who will be missing.

“I’m really pleased with the group and confident that we’re going in the right direction.”

Everton’s trip to Aston Villa was postponed because of a Covid-19 outbreak in the visitors’ squad.

It was the third WSL game to be called off this weekend because of Covid-19 cases, after Chelsea’s London derby with Tottenham and West Ham’s home game against Manchester United were also postponed.

All games will be rescheduled for a later date in the season.