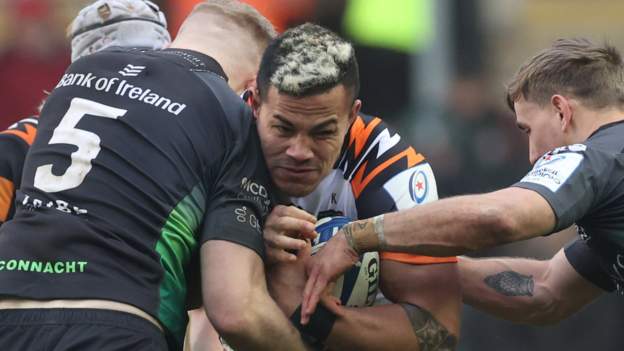 Connacht have brought in Matt Healy, Shane Delahunt and Niall Murray for the Champions Cup encounter against Leicester Tigers in Galway.

Healy, who is Connacht’s all-time record try scorer, will make his first appearance of the season.

Premiership pacesetters Leicester make eight changes from the side which lost to Wasps last weekend.

The Tigers beat Connacht 29-23 last month and lie third in Pool B with the Irish side in sixth.

Tigers supporters are unable to travel to the Sportsground because of Irish government Covid restrictions.

“Connacht are a dangerous side and play some excellent attacking rugby, which causes issues for their opposition when they move the ball around,” said Tigers coach Steve Borthwick.

“They have a tough forward pack, with a hard-working back row, and some exceptional players in their backline with pace out wide.

“Our fans have been incredible so far this season, home and away, so we are very disappointed that we won’t have any in the stands on Saturday afternoon.

“Wherever they are watching on from this weekend, I want to thank them ahead of time for their support from afar and reassure them we know they are behind us.”

The defeat by Wasps was Leicester’s first of the season and they are tied on nine points with Pool B leaders Harlequins and Munster in their European campaign.

Connacht come into the match buoyed by their URC derby victory over Munster on New Year’s Day.

“This is a huge game and a huge opportunity for the club, but we’ve been treating this like any other game that we want to win,” said coach Andy Friend.

“We’ve grown as a group even in the last month since we visited Leicester, so now it’s all about executing and playing as well as I know we’re capable of.”