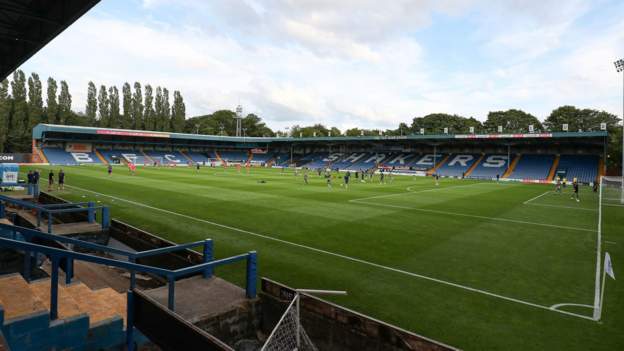 A fan group who are attempting to buy Bury FC and their Gigg Lane ground say that contracts have been exchanged on a deal to buy the stadium, the club’s name and memorabilia.

Est 1885 say the purchase is expected to be completed by the end of January.

The announcement comes after fans were pledged £1m from a government-run community scheme to buy the ground.

Should the deal go through, it will return football to Gigg Lane under the original Bury FC name, Est 1885 said.

The group added: “We appreciate the significant progress Bury AFC [a separate club set up by fans in the aftermath of the Shakers’ demise] have made over recent years and have formed a working party with their representatives together with the Football Supporters Association and the council to discuss the way forward.

“This will return football to Gigg Lane and our aim is under the name Bury FC.”

Speaking to BBC Radio Manchester after the announcement, Matt Pickup of Est 1885 said that all parties were working on a target of football returning to the ground in August of this year, in time for next season.

“We want to get things done as soon as possible with that deadline in mind,” he said.

“We want one club [in the town of Bury]. All parties do, going forward. The working group we have with them [Bury AFC] has been positive and that’s going to continue in the coming days and weeks.

“After years of bad news it’s so good we’ve had this bit of great news.”

Bury were expelled from the English Football League in August 2019, with owner Steve Dale putting the club into administration in November 2020.

In October, a consortium headed by supporters group Est 1885 entered into a period of exclusivity to buy the club – as well as the 12,500-capacity stadium – from the administrators.

Bury AFC, who are currently top of North West Counties League First Division North, said they would hold a vote with members once more detail on future plans are known.

“There is no reason for concern about the club, players or staff as they are all at the heart of any future plans,” they said.

“There is no intention to discontinue this club or its progress to date, and we remain committed to ensuring there is one club representing the town next season.”

This seems like the biggest step yet towards football returning to Gigg Lane for the first time since Bury were expelled from the English Football League in 2019.

Deals to buy the club’s name and the ground are effectively agreed and contracts exchanged. Now the only remaining hurdle is providing the money to buy the club, and the fan-led Est 1885 group are confident they have that through benefactors, fundraising and council funds.

Of course, once the transfer is complete the next question is whether a resolution can be found that sees the newly formed Bury AFC merged with the history of the old club and playing back at Gigg Lane under one name, or whether the town ends up with two non-league clubs at two different grounds, and maybe even playing in the same league next season.