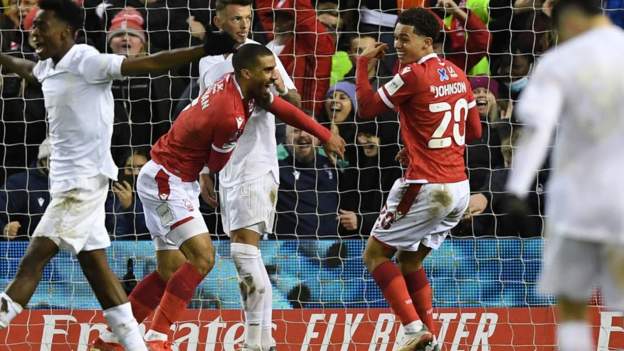 Arsenal lost to Nottingham Forest in the FA Cup third round for the second time in four years thanks to Lewis Grabban’s late strike.

The visitors were passive throughout and were deservedly beaten at the City Ground.

Mikel Arteta made numerous changes to his line-up but there was still a strong core to his team.

Bukayo Saka, Martin Odegaard and the in-form Gabriel Martinelli were among those in the side.

Forest, who beat the Gunners 4-2 at the same stage in 2018 and who have not lost a home tie in six years, were physical from the start.

Debutant Kienan Davis, leading the line after completing a loan move from Aston Villa, caused problems for the visiting defence during a first half in which Arsenal failed to assert themselves.

Arteta’s frustration was illustrated when he substituted left-back Nuno Tavares for Kieran Tierney after 34 minutes, with the Portuguese defender throwing his gloves away and refusing to acknowledge his manager on the sidelines.

But with eight minutes left, substitute Grabban met another Johnson cross, and this time it found the net to condemn Arsenal to another third-round exit in the East Midlands.

Watch five third-round ties live across the BBC including Manchester United v Aston Villa – plus highlights from every match (UK only). Read the full details here.