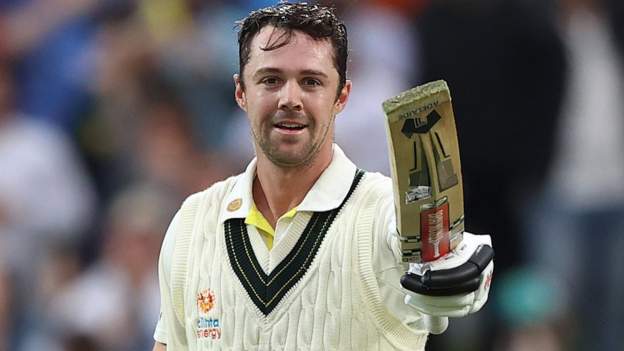 England’s sloppy performance was punished by a swashbuckling century from Australia’s Travis Head on day one of the fifth Ashes Test in Hobart.

Grabbing the chance to bowl first on the greenest of surfaces with the pink ball, England were initially excellent in reducing the home side to 12-3.

However, amid the early chaos, Marnus Labuschagne was dropped on nought, a mistake from Zak Crawley that proved crucial.

Labuschagne counter-attacked for 44 in a rapid stand of 71 with Head, who continued to climb into the England attack in a partnership of 121 with Cameron Green.

Head, recalled after missing the fourth Test as a result of contracting Covid-19, made his second century of the series from 112 deliveries, only to be dismissed next ball for 101.

Green fell for 74 shortly before rain ended the day with more than 30 overs unused and Australia on 241-6.

While that would ordinarily seem like a decent return for England, the conditions, the turnaround from the early wickets and the prospect of run-scoring being difficult in the remainder of the match probably means Australia have had the better of the day.

To compound England’s problems, Ollie Robinson bowled only eight overs because of a lower back complaint.

This was an action-packed and, at times, surreal day on which Hobart became the 16th ground – and seventh in Australia – to host an Ashes Test.

From Stuart Broad falling on his face delivering the first ball of the match, to Labuschagne doing the same to be bowled by the same man, followed by England being flayed in conditions ideal for bowling.

As part of five changes from the drawn fourth Test in Sydney, Ollie Pope replaced the injured Jonny Bairstow and Rory Burns returned for Haseeb Hameed. Although Ben Stokes is playing, he is not fit to bowl, leaving a four-man seam attack depleted when Robinson went down.

However, that does not excuse Crawley’s momentum-changing drop of Labuschagne, or England’s wayward bowling after the first hour.

As Head emerged from Labuschagne’s slipstream, Mark Wood and Chris Woakes were expensive, leaving England captain Joe Root to rely on his own off-breaks.

England had the late boost of removing Green, but even when they do find a way through the Australia tail, there will be trepidation when a fragile batting line-up is exposed to the home attack on the emerald green pitch.

In isolation with Covid, Head had to watch his replacement for the fourth Test, Usman Khawaja, peel off two centuries in Sydney.

To accommodate both men, opener Marcus Harris was sacrificed and Khawaja pushed up the order, with Head – now the series’ leading run-scorer – repaying the faith shown in him.

What made the left-hander’s effort all the more impressive was the perilous situation Australia were in when he arrived at the crease, but he stylishly crashed through the off side and whipped off his pads.

To emphasise the ferocity of Australia’s counter-attack from the peril of 12-3, in the 20 overs that followed they added 103 runs for the loss of Labuschagne.

Such was Head’s authority, it was a surprise when he tamely patted Woakes to mid-on one ball after reaching his fourth Test hundred.

The powerful Green played handsomely through the covers and seemed to have a maiden hundred at his mercy, only to fall into Wood’s short-ball trap.