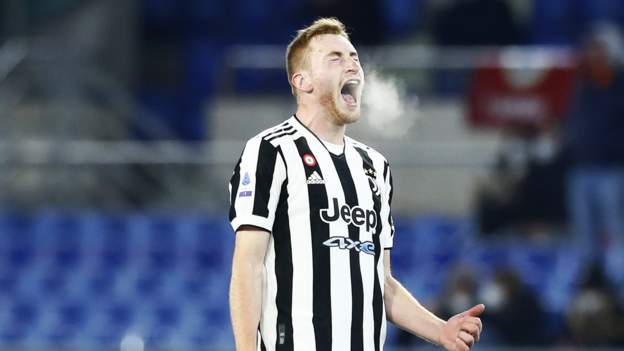 A stunning comeback from Juventus saw them score three goals in seven minutes to come from 3-1 down and beat Roma.

Roma’s Lorenzo Pellegrini then had a late penalty saved by Wojciech Szczesny after Matthijs de Ligt had been shown a second yellow card for handball.

Jose Mourinho’s side, who had loan signing Ainsley Maitland-Niles in the starting XI for the first time, went ahead on 11 minutes when Abraham nodded home Jordan Veretout’s near-post corner for his 14th goal in all competitions this season.

Paulo Dybala levelled for Juve shortly before half-time with a guided effort into the corner from the edge of the box.

Mkhitaryan restored Roma’s lead at the start of the second half when his long-range effort deflected off Daniele Rugani and looped over Szczesny, before Pellegrini curled a stunning 25 yard free-kick into the top corner to put the home side seemingly on course for a comfortable victory.

De Sciglio then sparked scenes of delirium among the visiting players when he drilled home the winner into the bottom corner from inside the area.

There was still time for more drama inside the final 10 minutes when centre-back De Ligt was sent off for a second bookable offence after blocking Abraham’s shot with his arm in the area.

Pellegrini took the spot-kick but Szczesny guessed the right way and palmed the ball clear.

AC Milan kept up the pressure on title rivals Inter with a comfortable 3-0 win at Venezia.

Zlatan Ibrahimovic tapped home his eighth goal of the season from Rafael Leao’s cross to give Stefano Pioli’s side the lead after just two minutes.

The visitors doubled their lead at the start of the second half when Theo Hernandez latched onto Leao’s pass before rifling into the corner.

Venezia were reduced to 10 men when defender Michael Svoboda was sent off for handling the ball on the line, with Hernandez dispatching the spot-kick to complete a comfortable victory.

The win moves Milan to the top of the Serie A table, though Inter can return to the summit if they avoid defeat against Lazio on Sunday’s late game.