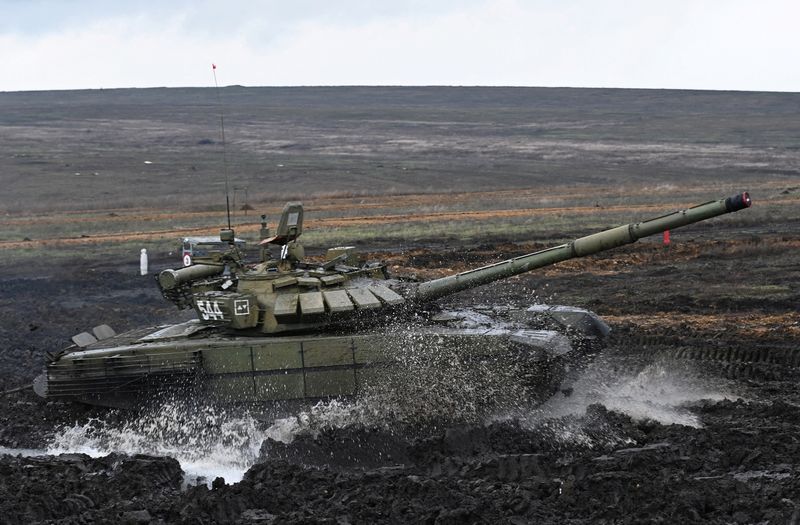 MOSCOW (Reuters) – Russia’s deployment of tens of thousands of troops to the north, east and south of Ukraine https://www.reuters.com/world/europe/expect-worst-ukraine-hit-by-cyberattack-russia-moves-more-troops-2022-01-14 is fuelling fears in Kyiv and Western capitals that Moscow is planning a new attack. Russia denies any such plans.

Western military analysts have suggested Russia cannot keep such troops deployed where they are indefinitely for financial and logistical reasons and would need to pull them back by summer.

Estimates of the numbers of new Russian troops moved closer to Ukraine vary from 60,000 to around 100,000, with a U.S. intelligence document suggesting that number could be ramped up to 175,000.

U.S. officials have said Russia might attack Ukraine as early as this month when the ground will be harder, making it easier for tanks and other armour to move swiftly.

At talks this week with the United States and NATO, Russia has sought security guarantees to defuse the crisis.

Foreign Minister Sergei Lavrov said on Friday Moscow was not ready to wait forever for a response and that it wanted a detailed written response to every Russian proposal.

Here are some possible scenarios.

Heavily armed Russian-backed separatists have controlled a swath of eastern Ukraine since 2014 and continue to exchange fire with Ukrainian government forces despite a 2015 ceasefire that ended major hostilities.

The conflict in Donbass has killed 15,000 people, Kyiv says. Ukraine has long accused Russia of having regular troops in the region, something Moscow denies.

Russia has accused Kyiv of harbouring plans to retake the region by force, something Ukraine denies.

In such a febrile atmosphere, the risk of a misunderstanding or unplanned escalation is greater, and Russia could use such an incident as a casus belli.

A source familiar with the Russian Defence Ministry’s thinking said this was the most likely scenario if Moscow decided to attack, but that he was unaware of any such decision. Kyiv might also be provoked into attacking by the separatists who could then ask Russia to send troops to help, he said.

Russian forces could expand the fighting in Donbass to draw Ukraine into a conventional conflict, said Neil Melvin, director of International Security Studies at the RUSI think-tank in London. He said Moscow could try to seize Ukrainian coastal areas on the Sea of Azov, creating a land bridge from the Russian city of Rostov through Donbass to Crimea, adding: “That would put the Ukrainian government under a lot of pressure.”

Russia has brought in new forces to Crimea, which it annexed from Ukraine in 2014.

Moscow could launch an attack on Ukraine from Crimea and seize territory up to the Dnieper River that could serve as a natural barrier against any Ukrainian counter-offensive, said Konrad Muzyka, director of the Poland-based Rochan consultancy.

The operation could begin with artillery, missile and air strikes on Ukrainian units in the south, and special forces units might seize bridges and railway junctions, allowing troops and tanks to advance, he said. There are only two roads from Crimea that could be blocked or destroyed, a potential weakness, he said.

Forces would secure control of a canal that provided Crimea with fresh water supplies until Russia annexed the region and Ukraine stopped the flow, he said.

A publicly available U.S. intelligence document said Russia could stage an invasion this month with up to 100 battalion tactical groups (BTGs) or some 175,000 troops. It said about 50 BTGs were already in place to the north and east of Ukraine and in Crimea to the south.

Seizing southern Ukraine could cut Kyiv off from the coast and NATO’s presence in the Black Sea, Melvin said, and could play well with Russian nationalists who see the area as the historic “Novorossiya” lands or “New Russia”.

A multi-front assault might also involve a move into northeastern Ukraine, encircling but perhaps not entering cities where forces could get bogged down in urban fighting. Russian troops could also move into Belarus, opening a northern front for Ukraine that would put Russian forces closer to Kyiv, Giles said.

“This of course would be the most costly economically, politically and in terms of human lives and that’s probably why it’s least likely,” Melvin said of an all-out invasion.

Military analysts said even if it overwhelmed Ukraine’s army, which is half the size of its own, Russia could face guerrilla-type resistance, making it hard to hold on to captured territory.

“The different scenarios for how exactly Russia might seek to persuade the West to meet its (security) demands by punishing Kyiv don’t even necessarily include a land incursion,” he said.