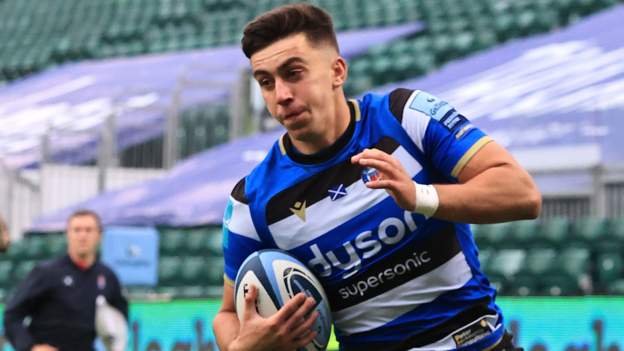 Scotland’s Cameron Redpath will start his first Bath game since May at fly-half as they face La Rochelle in the Champions Cup on Saturday.

Redpath impressed on his Scotland debut in a historic 2021 Six Nations win in England, before injuring his knee in a Premiership match three months later.

The 22-year-old is one of seven players brought into the starting XV after Bath’s first league win of the season.

France international Brice Dulin comes in at full-back following the side’s narrow defeat by Castres on 2 January, while Jonathan Danty starts at 12.

With Danny Cipriani, Orlando Bailey, Tian Schoeman, Max Ojomoh and Tom de Glanville all unavailable because of injury, Redpath – usually a centre – will take on the Bath No 10 shirt on his return.

Scrum-half Ben Spencer and wing Will Muir are back in the starting XV, with full-back Ruaridh McConnochie and centre Max Clark also among the starters.

In the front row, props D’Arcy Rae and Juan Schoeman replace the injured Will Stuart and Lewis Boyce, while hooker Tom Doughty will make his European debut.

On the bench, centre Will Butt is also set for his first European appearance and Russia prop Valery Morozov could make his Bath debut.

Bath are 10th in Pool A after two of four group games, with the top eight advancing to the last 16. La Rochelle are fourth.

Pierre Popelin starts at 10 for the French side, with prop Dany Priso, locks Romain Sazy and Remi Picquette and flanker Paul Boudehent also brought into the starting XV.

Pitch invaders will be banned – Arsenal

Pitch invaders will be banned – Arsenal