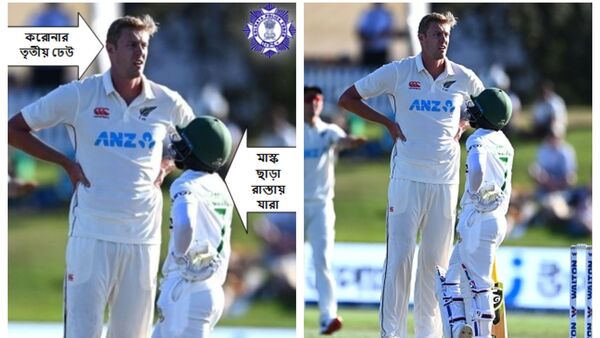 Lilliput Mominul Haque standing in front of the palm tree Kyle Jamieson. That picture of the New Zealand-Bangladesh series went viral on social media. With that viral picture, Kolkata police requested to wear a mask in coronavirus situation. That post has also gone viral.

That picture of Jamison and Mominul was posted on the Facebook of Kolkata Police on Friday. Next to Jamieson’s picture is written, ‘The third wave of the corona.’ Next to the picture of Mominul, the captain of the Bangladesh Test team, is written, ‘Those on the streets without masks.’

That picture has gone viral on social media. One netizen wrote, ‘Kolkata police is also making memes now. Keep going. ‘ One writes, ‘The thinking is overwhelming.’ Another said, ‘The Kiwis fell to the small believers even though they were tall. So maybe we can beat the third wave and survive. ‘ One netizen said again, ‘Great, great. The message is clear. Make a big hoarding of it and hang it all over the city. ‘ However, many have expressed anger again. A Bangladeshi netizen wrote, ‘Put someone in Mominul’s place. Because this Mominul Bahini destroyed the third wave of Corona (read New Zealand) that day. ‘

It is to be noted that the incident took place on the second day of the first Test between New Zealand and Bangladesh between 6 feet 6 inches Jamison and 5 feet 26 inches Mominul. The Kiwi pacer made a strong LBW appeal against Mominul. But the umpire denied it. Jamieson was disappointed. Stood in front of Mominul. At that moment Mominul looked up. That picture went viral on social media. In the end, it was the Lilliput Mominuls who beat New Zealand in the first Test. Bangladesh, however, lost the next Test.