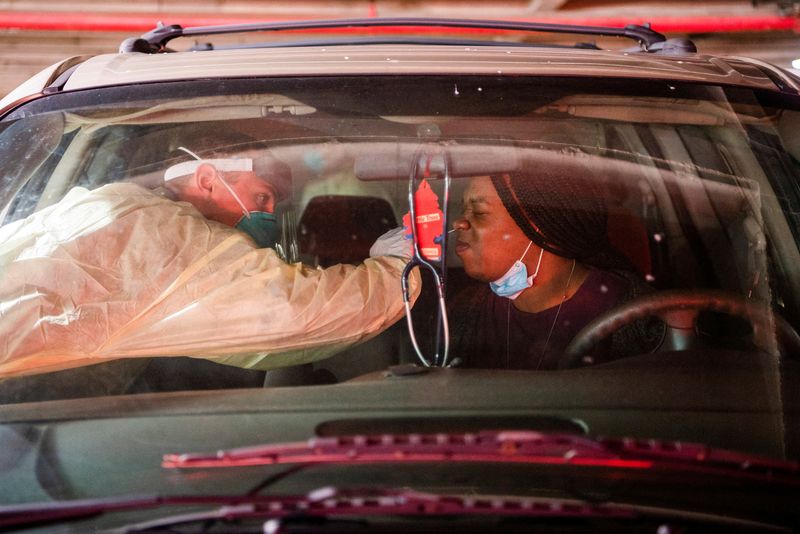 By Susan Heavey and Maria Caspani

WASHINGTON (Reuters) -COVID-19 hospitalizations in the United States are poised to hit a new high as early as Friday, according to a Reuters tally, surpassing the record set in January of last year as the highly contagious Omicron variant fuels a surge in infections.

Hospitalizations have increased steadily since late December as Omicron quickly overtook Delta as the dominant coronavirus variant in the United States, although experts say Omicron will likely prove less deadly than prior iterations.

Health officials have warned that the sheer number of infections caused by Omicron could strain hospital systems, some of which have already shown signs of distress, partly due to staffing shortages.

The United States reported 662,000 new COVID-19 cases on Thursday, the fourth highest daily U.S. total coming just three days after a record of nearly 1 million cases was reported, according to the Reuters tally.

The seven-day average for new cases set a record for a 10th consecutive day at 597,000, while COVID hospitalizations reached nearly 123,000 and appeared poised to top the record of over 132,000.

Deaths, an indicator that lags hospitalizations, remain fairly steady at a still high 1,400 a day, according to the tally, but well below last year’s record numbers.

New York Governor Kathy Hochul and the head of one of the largest U.S. hospitals both said they were cautiously optimistic that cases and hospitalizations would soon plateau in the state.

“We think with our modeling that the peak will happen next week,” said Steven Corwin, chief executive of New York-Presbyterian Hospital, during Hochul’s daily briefing.

Hospitalization data, however, often does not differentiate between people admitted for COVID-19 and so-called incidental positives. Those are patients who were admitted and treated for other issues and contracted the virus while in the hospital and are counted among COVID hospitalization numbers.

Incidental infections have occurred throughout the pandemic but might be significantly higher now due to the staggering pace of Omicron’s spread – a phenomenon that has prompted state health departments to consider altering their disclosures.

In New York, where hospitalizations are on the rise, the governor said 42% of patients hospitalized with COVID-19 were admitted for other reasons and then found to be infected.

Starting next week, Massachusetts hospitals will report whether admissions are primary or incidental to COVID-19, said Kathleen Conti, a spokesperson for the state’s department of health.

Rising cases have forced hospital systems in nearly half of U.S. states to postpone elective surgeries.

Employment at hospitals slipped in December to the lowest since June.

The healthcare sector https://graphics.reuters.com/USA-ECONOMY/jnpwejalrpw/chart.png stood out as one of the weaker spots in Friday’s U.S. monthly employment report, with overall employment in the sector dipping by about 3,100 workers.

While many school systems have vowed to continue in-person instruction, some have faced closures as cases rise. In Chicago – the third-largest U.S. public school system – schools were closed for a third day on Friday amid a teacher walkout over COVID-19 protections.

U.S. and other officials have said schools can be safely opened, especially with widely available vaccines and boosters.

Officials continue to press vaccinations as the best protection against serious illness, although federal mandates requiring them have become politically contentious.

U.S. staff of Citigroup Inc (NYSE:) who have not been vaccinated against COVID-19 by Jan. 14 will be placed on unpaid leave and fired at the end of the month unless they are granted a vaccine exemption, a source told Reuters https://www.reuters.com/business/finance/citi-terminate-employees-unvaccinated-jan-14-source-2022-01-07 on Friday.

The U.S. Food and Drug Administration on Friday shortened the interval https://www.reuters.com/business/healthcare-pharmaceuticals/us-fda-cuts-gap-moderna-covid-19-booster-dose-five-months-2022-01-07 between the primary series of the Moderna (NASDAQ:) COVID-19 vaccine and a booster dose from six months to five for people aged 18 or older, in line with a similar move for those eligible for Pfizer/BioNTech boosters.