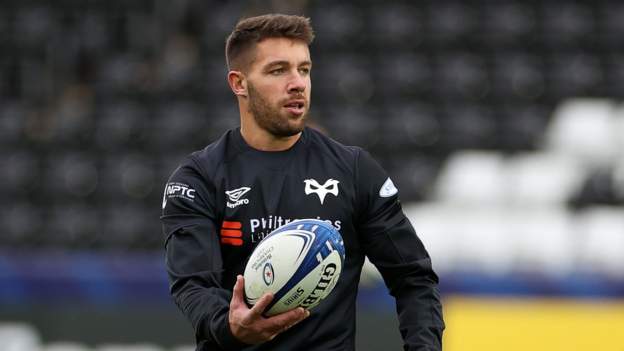 Rhys Webb and Alex Cuthbert return to the Ospreys starting line-up for the visit of French giants Racing 92.

Keiran Williams is also back in the XV as part of six personnel changes to the side beaten in Glasgow last weekend.

Racing are top of the Champions Cup table, while Ospreys are bottom.

The two sides had been due to meet on 17 December, but Racing were awarded a 28-0 bonus-point win when positive Covid tests meant Ospreys could not travel.

Racing previously thumped Northampton 45-14 in what was a sobering reminder of the gap to Europe’s elite.

Mat Protheroe moves to full-back for Ospreys in the absence of Dan Evans, with Cuthbert and Luke Morgan on the wings.

Michael Collins drops to the bench to make way for Williams, who partners Owen Watkin in the midfield.

Webb resumes the captaincy and his half-back partnership with Gareth Anscombe.

There are two changes in the front row with Gareth Thomas preferred at loose-head to Nicky Smith and Dewi Lake coming in at hooker. Tomas Francis remains at tighthead.

Adam Beard and Rhys Davies pack in behind, while Ethan Roots slots into the back row alongside Jac Morgan and Will Griffiths.

Back rower Will Hickey is set to make his Ospreys debut off the bench.

Racing make nine changes to the side that beat Clermont in France’s Top 14 last weekend.

Juan Imhoff comes in on the wing to make up a backline including Kurtley Beale and Teddy Thomas.

Scotland’s Finn Russell and Maxime Machenaud continue as the half-back pairing, while Eddy Ben Arous and Teddy Baubigny come into the front row alongside Ali Oz.

Boris Palu replaces Bernard Le Roux in the second row alongside Luke Jones, while there is an all new back row of Ibrahim Diallo, Baptiste Chouzenoux and Anthime Hemery.

Ospreys head coach Toby Booth: “It is the battle of the budgets for sure. Racing are on record of saying how seriously they are taking this competition and they are not afraid to shy away from that.

“Traditionally, sometimes the teams that travel from France are not always their strongest, but this is going to be as good as they have got.

“We have got what we have got, with a lot of young players and this is a learning and challenging opportunity for our youngsters. We will be better for it, win, lose or draw.”