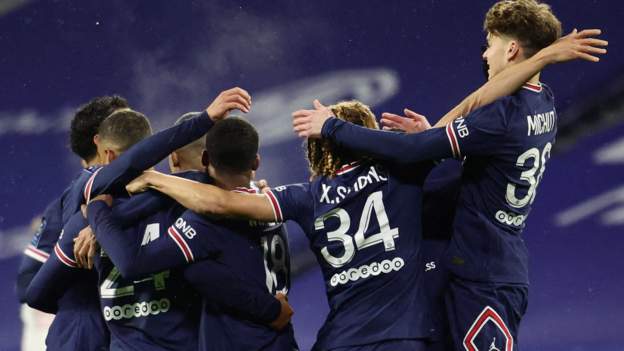 Ligue 1 leaders Paris St-Germain fought back from a goal down to earn a hard-fought point at Lyon.

Kylian Mbappe hit the post in each half with fine curling efforts, while Marquinhos drew a good save out of Lyon keeper Anthony Lopes.

PSG lead Nice by 11 points, while Lyon are 11th after a fourth straight draw.

Lionel Messi was one of four PSG players forced out of the game due to testing positive for Covid-19, the Argentine remaining in his homeland until he returns a negative test result.

Neymar was also absent as he continued to recover from an ankle injury that is likely to keep him out of action for at least the next three weeks.

Lyon opened the scoring when Bruno Guimaraes’ superb long pass was chested down and controlled by Paqueta, before the Brazilian shot low into the bottom corner.

Mbappe struck the post from open play before the break, while his effort in the second half came from a free-kick as PSG pressed.

But a trio of substitutions by boss Mauricio Pochettino on 69 minutes proved decisive with Edouard Michut’s cross finding fellow replacement Kehrer, who scored for the first time since February 2020 to secure a draw for the runaway leaders.