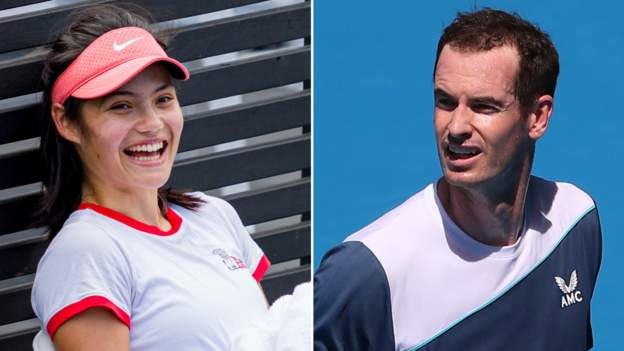 Emma Raducanu and Andy Murray will lead the British interest when an Australian Open still clouded by the Novak Djokovic controversy starts on Monday.

Raducanu, 19, goes into the first Grand Slam of the 2022 season as the most recent women’s major champion with everyone wondering how she will follow September’s US Open win.

At the opposite end of the career scale is 34-year-old Murray. The five-time finalist is returning to Melbourne for the first time since an emotional news conference there in 2019, when he said he thought he would have to retire from the sport because of an impending hip operation.

But the tournament has been overshadowed by the saga involving Djokovic, who won the men’s title for a record ninth time last year.

The 34-year-old Serb has been practising at Melbourne Park but faces deportation from Australia because of the row over his vaccine exemption, with his visa being revoked for a second time.

An appeal hearing is expected to be heard on Sunday. If he wins it, Djokovic is set to play his opening match on Monday.

Japan’s Naomi Osaka will be defending her women’s singles title after shaking off an injury, while world number one Ashleigh Barty is aiming to end Australia’s 44-year wait for a home champion.

Nobody predicted before the 2021 Australian Open that Raducanu would end the season as a major champion. And how the British teenager is going to fare in 2022 is equally difficult to guess.

What is for sure is it will be fascinating to see how Raducanu develops in her first full season on the WTA Tour.

Expectations should be realistic and the chances of her winning back-to-back Grand Slams with victory in Melbourne appear to be slim.

Such a feat would again defy the odds. Osaka is the only woman in the past 20 years to follow her first Grand Slam title by immediately winning the next one.

Raducanu has a very tough start too, facing 2017 US Open champion Sloane Stephens in the opening round.

She is ranked 18th in the world and, when she played for the first time in 2022 after contracting Covid last month, lost 6-0 6-1 to Kazakhstan’s Elena Rybakina in Sydney.

“Even if I keep getting knocked down, it’s just about getting back up and basically just falling in front,” she said afterwards.

Three years ago at Melbourne Park, Murray caught everyone by surprise by tearfully announcing he feared his illustrious career was coming to an end.

Now the three-time Grand Slam champion makes a poignant return to the event after managing to restart his career, despite having a metal hip and being stalled by a host of subsequent niggling injuries.

Ranked 135th in the world, Murray was awarded a wildcard by Australian Open bosses and he remains confident of going deep into major tournaments once again.

Encouraging performances towards the end of 2021 reinforced his belief and he backed that up by reaching the Sydney final – although he was beaten on Saturday by Russian top seed Aslan Karatsev.

Speaking before that match, Murray said: “It’s not a goal of mine to get to a specific ranking, like in the next year, but improving your ranking and getting yourself up into the top 50, top 30, top 20, allows you to be seeded in tournaments.

“It potentially makes it easier to have better draws or to have a better run in a major event. There are many positive things to having good runs in these tournaments.”

Murray starts in Melbourne against Georgian 21st seed Nikoloz Basilashvili, who he beat on his run to the Sydney final.

Can Norrie continue 2021 success? And what about the other Brits?

During Murray’s injury strife, Cameron Norrie and Dan Evans have had turns as the nation’s leading men’s player and both go into 2022 on the back of career-best seasons.

Norrie, 26, is ranked 12th in the world after correctly predicting he would be one of the ATP Tour players to enjoy a breakthrough year.

The crowning glory came when the left-hander won the prestigious Indian Wells title in October, lifting him into the world’s top 15 and overtaking Evans as the British number one.

Now Norrie will be looking to maintain that level and transfer that success into the Grand Slam events. In 16 main-draw appearances at the majors, he has never gone past the third round.

Evans, 31, also won the first ATP title of his career last season – at the Murray River Open in Melbourne – and continued his good form to reach a career-high ranking of 22nd.

This year has started successfully, too. Evans won all three of his singles matches at the ATP Cup and reached the semi-finals in Sydney.

Raducanu will be joined in the women’s singles draw by Watson, who is the only other British player with automatic entry by ranking after Johanna Konta’s retirement.

Dart, 25, beat Australian wildcard Kimberly Birrell on Friday to come through qualifying and will play 2020 French Open champion Iga Swiatek in the first round.

Broady, 28, secured his place in the main draw for the first time with a comeback win against Russia’s Roman Safiullin. His reward is a match-up with home favourite Nick Kyrgios.

Jamie Murray is one of six other Britons playing, along with Neal Skupski, Jonny O’Mara, Dom Inglot, Ken Skupski and Lloyd Glasspool.

In the wheelchair draws, five-time Grand Slam singles champion Alfie Hewett plays after being told he can continue his career. In 2019 he was told new classification rules would make him ineligible to compete.

Gordon Reid is aiming to replicate his 2016 triumph and resumes his dominant partnership with Hewett in the doubles.

Lucy Shuker competes in the women’s singles and five-time doubles champion Andy Lapthorne is the nation’s sole representative in the quad draw.

Who are the men’s favourites if Djokovic doesn’t play?

Djokovic’s off-court saga has completely overshadowed the focus on what could happen on the court in Melbourne.

Dominating the tournament over the past decade – and the men’s tour again last year – meant the Serb was the overwhelming favourite to win a record-extending 10th title.

Russia’s Daniil Medvedev is the second seed and goes in as the latest Grand Slam champion, having beaten Djokovic in September’s US Open final for his first major.

Spain’s Rafael Nadal, who is tied with Djokovic and the injured Roger Federer on 20 Grand Slam singles titles, is also among the contenders, having recovered from injury and a positive Covid test last month.

The sixth seed looked good as he won a warm-up tournament in Melbourne last week, although playing a higher calibre of opponents over five sets will be a step up for the 35-year-old.

Germany’s Alexander Zverev is looking to build on a dominant end to 2021 by finally landing a Grand Slam title, while Greece’s Stefanos Tsitsipas – another looking to become a first-time major champion – says he hopes to be “performing at 100%” as he continues his recovery from elbow surgery.

Switzerland’s Federer is still missing with a long-standing knee issue and Austria’s Dominic Thiem is another absentee because of a wrist injury.

Dominant on the WTA Tour, two-time Grand Slam champion Ashleigh Barty goes again for the trophy which she really craves and is rated the favourite to win.

Home hopes of a first Australian Open champion since 1978 are pinned on the 25-year-old Queenslander, who won at Wimbledon last year.

Barty has been ranked as the world’s leading player for 110 weeks in total and, in her first tournament back after ending her 2021 season in October, won the Adelaide title.

Osaka, 24, is expected to be fit after withdrawing from her semi-final at the Melbourne Summer Set with an injury.

The two-time champion is seeded 13th as she returns to Grand Slam action. The Japanese player took a four-month break from the sport after the US Open, during a year where she looked to protect her mental health.

Serena Williams misses another opportunity to win a record-equalling 24th Grand Slam singles title, with the 40-year-old American saying last month she was not “physically ready” to be able to compete.