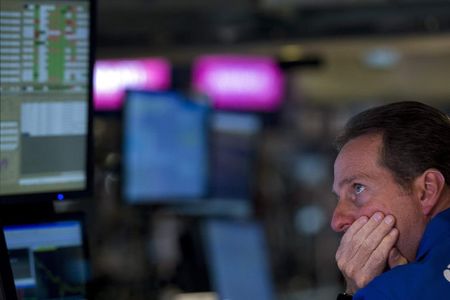 A trio of major Wall Street banks including Citigroup, Wells Fargo, and JPMorgan (NYSE:) reported better-than-expected results, but the latter slumped 6% as its guidance on increased costs worried investors.

JPMorgan said it expected expenses to rise by 8% this year, stoking concerns about whether the bank will meet its 17% target for return on tangible equity.

Citigroup (NYSE:) shares reported a 26% fall in profit, paced by wider-than-expected decline in trading revenue, with fixed-income trading revenue down 20% in the fourth quarter. Its shares fell 2%.

Wells Fargo (NYSE:) rose more than 2% after its profit jumped 86%, and the bank delivered an upbeat outlook on loan growth for 2022.

Technology was flat, outperforming the broader market, as a climb in big tech and semiconductor stocks underpinned the broader sector.

Apple (NASDAQ:) was flat after Apple Bloomberg reported that the company may push back the debut of its virtual reality headsets.

Casino stocks were also in focused, with Las Vegas Sands (NYSE:) and Wynn Resorts (NASDAQ:) surged after Macau, the gambling mecca in Asia, detailed new measures for gambling operation in the region easing uncertainty around the renewal of gaming licenses.

In other news, Boston Beer (NYSE:) trimmed its outlook on annual earnings as rising costs and supply issues weighed on growth. Its shares fell more than 11%.

Sentiment on stocks was also hurt by signs of wobble in consumer spending after spending fell by a more than expected 1.9% in December.

Still, the weakness in consumer spending could prove a sliver lining for inflation.

”On the upside, the current retail weakness will accelerate inventory rebuilding, which should help take the pressure off inflation. It doesn’t necessarily soften the case for a March hike, but it reduces the tail risk of the Fed hiking more than 4 times this year,” Jefferies said in a note.

Share
Facebook
Twitter
Pinterest
WhatsApp
Previous articleLukka, a crypto asset data and enterprise software provider, raises a $110M Series E led by Marshall Wace at a $1.3B valuation (Yogita Khatri/The Block)
Next articleBest iPad deals: Save $30 on an iPad, $60 on an iPad Air, $100 on an iPad Pro
- Advertisement -