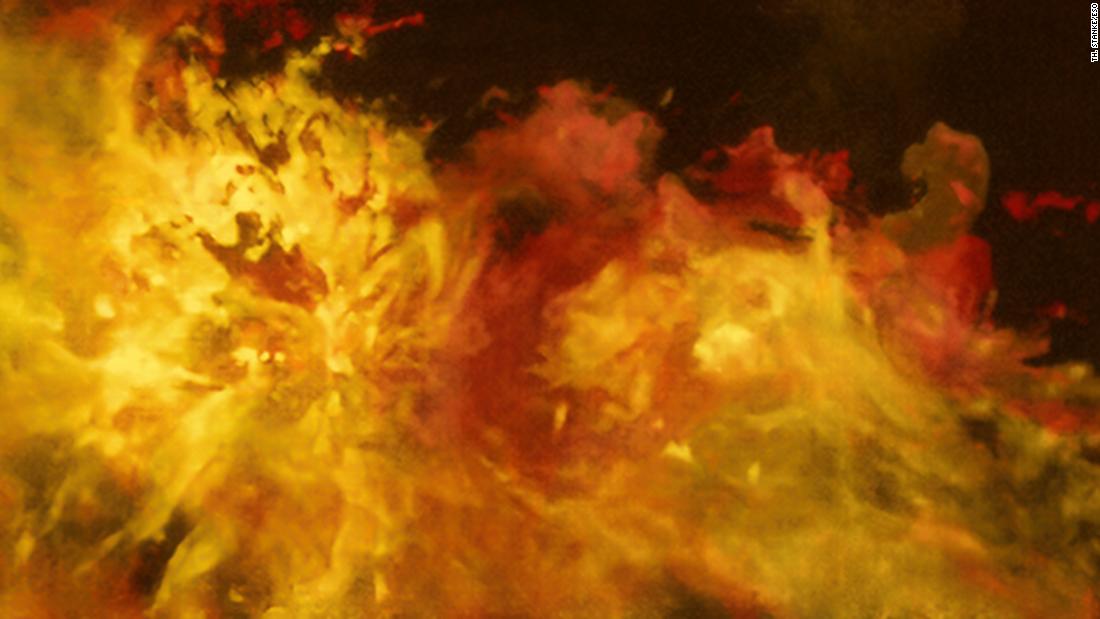 The observation was made by the Atacama Pathfinder Experiment, which is operated by the European Southern Observatory in Chile’s Atacama Desert.

Orion isn’t just a popular constellation. This region of the sky is also where giant clouds of hydrogen lead to the birth of new stars and planets. The molecular clouds are between 1,300 and 1,600 light-years away from our home planet.

The Flame Nebula has a cluster of young stars located at its center. These stars release high-energy radiation, which causes the gas clouds to shine in a spectacular way.

The new images are the result of observations made a few years ago by Thomas Stanke, a former European Southern Observatory astronomer, and his team. The newly processed images of the Flame Nebula, along with the other observations, have been accepted for publication in the journal Astronomy & Astrophysics.

This fresh look at the defining features of Orion came about after the SuperCam instrument was installed on the Atacama Pathfinder Experiment. The instrument is designed to observe the molecular clouds found across the Milky Way galaxy. For this particular research, the team used it to seek radio waves released by carbon monoxide in Orion’s clouds.

“As astronomers like to say, whenever there is a new telescope or instrument around, observe Orion: there will always be something new and interesting to discover!” Stanke said in a statement.

While observing the Flame Nebula and its surroundings, the researchers also observed clouds reflecting the light of nearby stars and discovered a new, small circular nebula they dubbed the Cow Nebula. The SuperCam instrument can help astronomers map these stellar nurseries where stars are born.

The Flame Nebula dominates the left half inside the yellow rectangle of the image below. On the right is a reflection of nebula NGC 2023 and to the upper right of that is the Horsehead Nebula.

Slide back and forth between the images to see the differences in the background, one captured in infrared light by the Visible and Infrared Survey Telescope for Astronomy at the Paranal Observatory in Chile and the other in visible light from the Digitized Sky Survey 2.

Given the popularity of Orion, telescopes have passed over this part of the sky in a multitude of wavelengths of light.

Despite the fiery appearance of the Flame Nebula, the clouds are very cold and only reach a few tens of degrees above absolute zero. Absolute zero is negative 273.15 degrees Celsius or negative 459.67 degrees Fahrenheit.