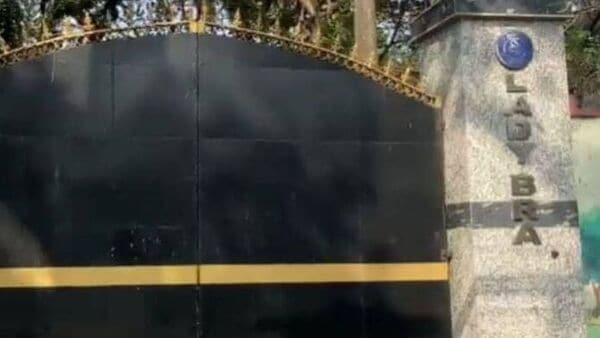 The college authorities had lodged a complaint with the Beniapukur police station regarding the theft of letters. Because after the theft of this letter, the traditional college became the food of laughter. Outside the gate was written ‘Lady Bra’ – women also had to feel uncomfortable while passing through. Someone or someone has taken away these letters because they are made of metal. Which can be sold to earn big money.

But why this obscene writing? রেখে With this question in mind, the college authorities took off ‘Lady Bra’. Now there is no more writing. However, sources said that the work will be carried out later by sticking stickers there. This strange situation spread on social media. The incident was reported in the news. The discomfort increased. That is why the letter ‘Lady Bra’ has been removed.

Note that the theft of letters took place at the second gate of this college. Lady bra has been visible ever since. The letters written on this lady bra were also unveiled on Saturday. The college will remain in this state until all the letters are re-inserted. Police of Beniapukur police station are investigating the matter. It is being investigated who stole the letters from the college.

Internal memo: Better.com CEO Vishal Garg resumes full-time duties over a month after taking time off following his controversial firing of ~900 staff on...