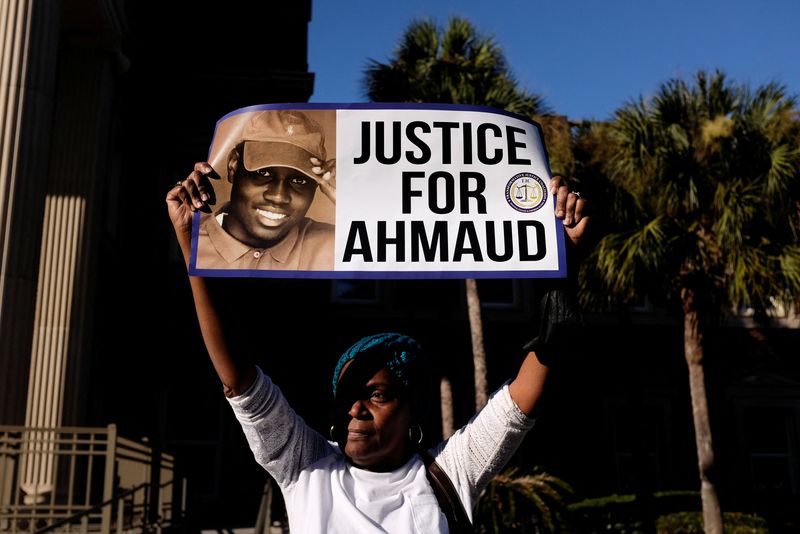 © Reuters. FILE PHOTO: A woman holds a sign outside the Glynn County Courthouse after the jury reached a guilty verdict in the trial of William “Roddie” Bryan, Travis McMichael and Gregory McMichael, charged with the February 2020 death of 25-year-old Ahmaud Arbery,

(Reuters) -The three white men who were convicted of murdering Ahmaud Arbery, a Black man running through their coastal Georgia neighborhood in 2020, appeared in court on Friday before a judge expected to sentence them to life in prison.

Under Georgia law, the only question before Judge Timothy Walmsley as the sentencing hearing began in Glynn County Superior Court in Brunswick (NYSE:) was whether to allow any of the three men to seek parole after 30 years.

Linda Dunikoski, the lead prosecutor, called on Arbery’s relatives to speak in support of her argument that the two McMichaels should die in prison as punishment for the killing, which sparked national outrage and helped fuel daily protests against racism in the criminal justice system in 2020.

Only Bryan should be able to seek parole, Dunikoski said, pointing to what she called “a demonstrated pattern of vigilantism” by the McMichaels, whom she said had shown no remorse.

Defense lawyers argued for mercy, with Bob Rubin, a lawyer for the younger McMichael, saying life without parole should be reserved only for “the worst of the worst.”

“His goal was not to commit a crime that day or kill somebody that day,” Rubin said of Travis McMichael. “His goal was to have a family afternoon.”

When Arbery’s father, Marcus Arbery, addressed the court, he said his son was killed doing what he loved most: running.

“That’s when he felt alive, most free, and they took all that from him. When I close my eyes I see his execution in my mind, over and over, and I’ll see that for the rest of my life,” he said. “The man who killed my son has sat in this courtroom every single day next to his father. I’ll never get that chance, to sit next to my son, ever again.”

Jasmine Arbery then spoke in a quavering voice with poetic descriptions of her brother’s Blackness, which she said was mistaken for criminality by his murderers: “He had dark skin that glistened in the sunlight like gold,” she said. “He had curly hair; he would often like to twist it. He had a broad nose and the color of his eyes was filled with melanin.”

Lawyers for all three men have said they will appeal the convictions. All three men also face a federal trial in February on hate-crime charges, accused in an indictment of violating Arbery’s civil rights by attacking him because of his “race and color.”

Arbery, a 25-year-old avid jogger, was running through the mostly white residential neighborhood of Satilla Shores on the afternoon of Feb. 23 when the McMichaels decided to grab their guns, jump in a pickup truck and give chase. The younger McMichael would later testify to the jury they had a hunch Arbery might be fleeing a crime.

Bryan joined the chase in his own pickup truck after it passed his driveway, and pulled out his cellphone to record Travis McMichael firing a shotgun at Arbery at close range. Arbery had nothing on him besides his running clothes and sneakers.

“They chose to target my son because they didn’t want him in their community,” Wanda Cooper-Jones, Arbery’s mother, told the court. “When they couldn’t sufficiently scare him or intimidate him, they killed him.”

Bryan’s video caused outrage when it emerged months later and it became clear that none of the men involved had yet been arrested after a local prosecutor concluded the killing was justified.