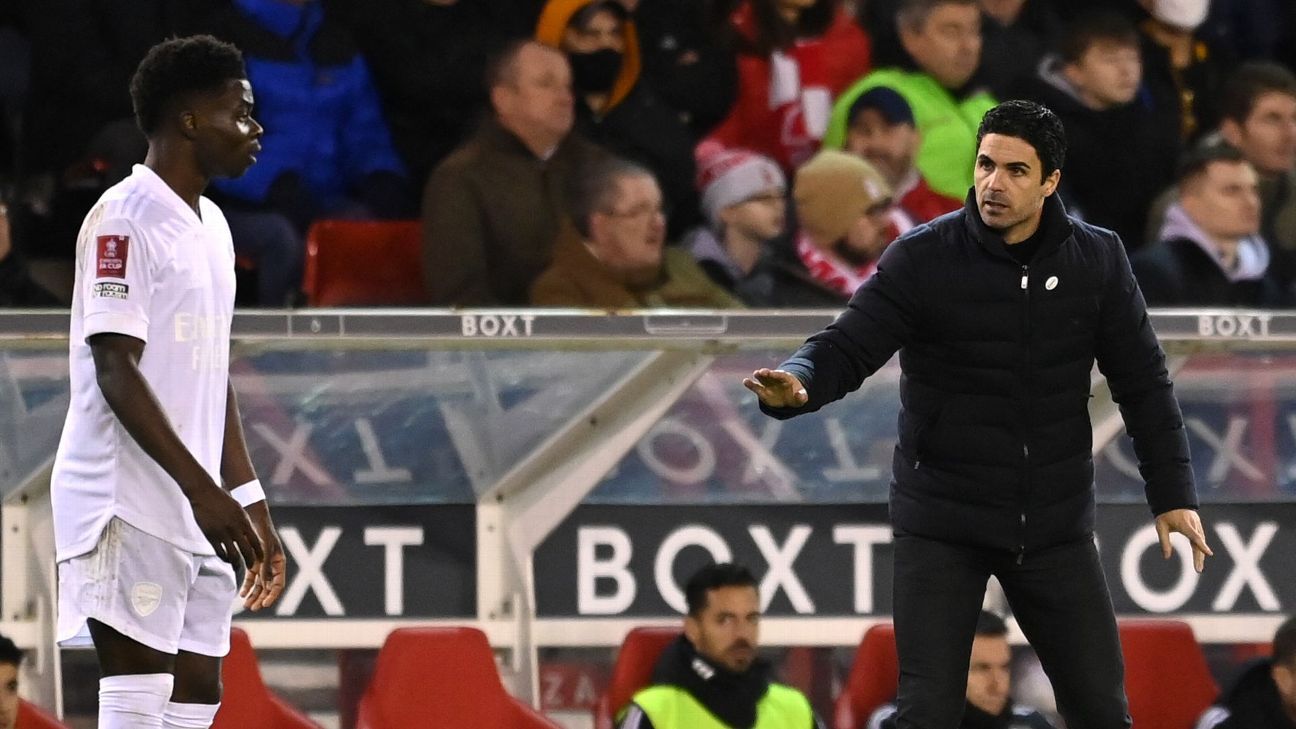 NOTTINGHAM, England — The FA Cup was Mikel Arteta’s making as a manager. Now he has to prove it doesn’t matter.

Arsenal‘s abject 1-0 third-round exit to Nottingham Forest on Sunday was precisely the sort of performance he had hoped to consign to history, riddled with indifference and lacking the focus their hosts had in abundance throughout. Pierre-Emerick Aubameyang has gone from talisman to outcast because, according to Arteta, he failed to show the “commitment and passion” required — but if that is the benchmark, then several of the line-up here are in danger of their own spell in the wilderness after this.

Even accounting for the missing personnel — which almost ran into double-digits through a mixture of COVID-19, injury and absentees at the Africa Cup of Nations — this felt like a real step backwards in Arteta’s mission of establishing a high base-level of performance from which Arsenal can rediscover former glories.

Arteta won this competition in 2020 through a series of resolutely determined and clinical performances, validating the methods of a first-time manager. Arsenal have subsequently underscored that verdict by climbing into the Premier League’s top four with half of the current season played. This progress has created genuine optimism they can soon return to the Champions League, elevating themselves to the status that renders the FA Cup a trivial pursuit rather than a defining event.

But this is the kind of fundamentally flawed outing that poses awkward questions about the strength of that progress. They failed to register a single shot on target and their all-white kit, a one-off as part of an initiative to tackle knife crime, was the best thing about them at the City Ground.

“I’m really disappointed with the performance, first of all,” Arteta said afterward. “Not with the attitude, but how much purpose we have and what determination we showed to change the game when it’s difficult to play against and the way they play. But [we needed] more drive, more hunger to win at any cost in every single action, much more. We were not there at our level today.”

Based on what we saw on the pitch, it is difficult to agree with the assessment Arsenal’s attitude was on point but, regardless, Arteta appeared most irritated by his team’s use of the ball in possession. He berated his centre-backs Ben White and Rob Holding for almost the entirety of the first half for playing the ball too slowly or opting for a simple square pass as opposed to sparking a more dynamic attack.

The most fearsome reprimand was saved for Nuno Tavares, however. Given a torrid time by Djed Spence — the Forest right-back on loan from Middlesbrough and surely destined for the Premier League if he maintains this level — Tavares was substituted after just 35 minutes.

The Portuguese threw his gloves to the floor and slumped in the dugout after high-fiving everyone housed within it except Arteta. Asked afterward what Tavares was doing wrong, Arteta simply replied: “I don’t want to talk about individuals.”

Albert Sambi Lokonga lost the ball cheaply in midfield, allowing Ryan Yates to break down the Forest right. He delivered a pinpoint cross for substitute Lewis Grabban to steer a low finish past Bernd Leno. Lokonga has shown promise since his summer arrival from Anderlecht but the Belgian and teenager Charlie Patino, making his first start for the club, were unable to get a foothold in the game for long periods. Lokonga’s neglectful surrender of possession for the defining moment encapsulated Arsenal’s already-identified need for a midfielder this month.

Granit Xhaka‘s absence due to the coronavirus is unfortunate. Thomas Partey and Mohamed Elneny‘s engagements at AFCON are untimely. The decision to allow Ainsley Maitland-Niles to join Roma is understandable as an isolated case. But the combination of all four left Arsenal light in the most combative area of the field in a typically hostile FA Cup encounter, the likes of which Arteta knows well.

“I know because I have played in games like that for the last 18 years, and I know how complicated it is to come here, and it’s no surprise the difficulties that you are going to face,” said Arteta. “But when we do that, we have to face it in a different way.

I want to try to get the best out of the players that we have. I think it is clear where we need to strengthen [in January], but at the moment it is what we have. And with what we have, we have to play.”

No club has won the FA Cup more than Arsenal’s 14. Yet here they created some unwanted history: this was only the second time in 26 seasons the Gunners have lost at the third-round stage.

The last time was on this same ground in 2018 and what turned out to be Arsene Wenger’s final season in charge, unable to arrest a decline into mediocrity. It was the same slide that Arteta is still trying to arrest. The task will feel a little tougher tonight.