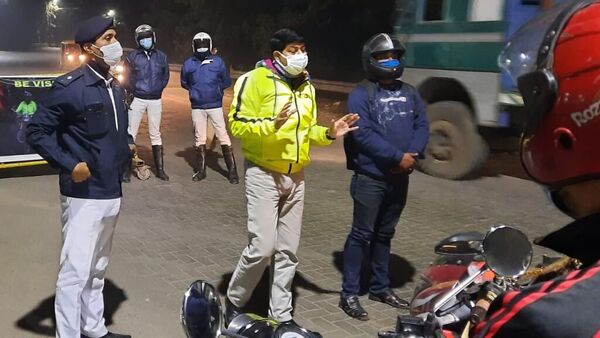 Now night curfew is going on in Kolkata. Even then road accidents do not stop. A day earlier, a traffic constable was seen being crushed in a lorry at night near Mohammad Ali Park. The traffic department and Lalbazar have been shaken by this incident. So the Kolkata police authorities have decided that from now on traffic constables and home guards on duty on the streets will be required to wear fluorescent jackets.

Following the tragic death, fluorescent jackets and a soldered light were placed on the shoulders of the sergeants on duty at night. In this regard, DC Traffic Arijit Sinha of Kolkata Police has given this instruction to the OCs of all the traffic guards in the city. The night has been marred by road accidents and crushing of traffic police in the city.

But why this guide? According to Lalbazar sources, the investigation into the incident that took place at the junction of Khabar, Central Avenue and MG Road at night revealed that the lorry driver could not see the traffic constable due to low visibility in the winter night fog. As a result, the driver of the lorry crushed the police of Jorabagan traffic guard. So using this fluorescent jacket and solder light traffic police can avoid such accidents.

However, a Kolkata police source said that this is not a new guideline. There was this guide before. But the traffic police personnel on duty were not following the instructions. So it was instructed again. In the presence of Police Commissioner Binit Goel, a song salute was given to the late Constable Mohammad Nasiruddin at Jorabagan Traffic Guard. The family members have been assured of all possible help from the Kolkata Police.

Daily infection in Corona below 5,000 in the state, 14 deaths in one day in North 24 Parganas