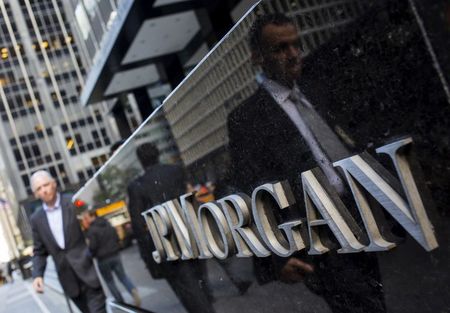 Investing.com – U.S. stocks are seen opening in a muted fashion Friday, with investors turning their attention to quarterly earnings from the major U.S. banks after the previous session’s sharp selloff.

The major indices on Wall Street closed sharply lower Thursday, with the leading the decline. The tech-heavy index fell 2.5%, ending a three-day winning streak, as expectations of higher interest rates on the back of surging inflation and hawkish Fed-speak prompted investors to rotate out of growth and into value stocks..

However, attention is likely to shift Friday towards the start of the fourth-quarter earnings season for real, with the likes of JPMorgan (NYSE:), Citigroup (NYSE:) and Wells Fargo (NYSE:) releasing results before the market opens.

The big banks are expected to benefit in the environment of rising bond yields, and investors will also be listening to what executives have to say about business and consumer borrowing and the health of the economy.

On a broader theme, year-over-year earnings growth from companies is expected to be slower in the fourth quarter compared to the first three quarters of last year, but still strong at 22.4%, according to IBES data from Refinitiv.

Elsewhere, Johnson & Johnson (NYSE:) could be in focus after a South African study showed the drugmaker’s Covid-19 vaccine booster shot is 85% effective in protecting against being hospitalized by the Omicron variant for 1-2 months after it is received.

There is also a full economic data slate to study, with December expected to decline by 0.1% month-on-month after rising 0.3% the previous month, December seen rising 0.3% on the month, and the seen deteriorating slightly to 70 from December’s 70.6.

Oil prices have traded higher Friday, on course to end the week higher for the fourth consecutive week on the back of a tight supply market and a drop in inventories to 2018 lows.

Traders will look to the release of the weekly as well as the positioning data later in the session.