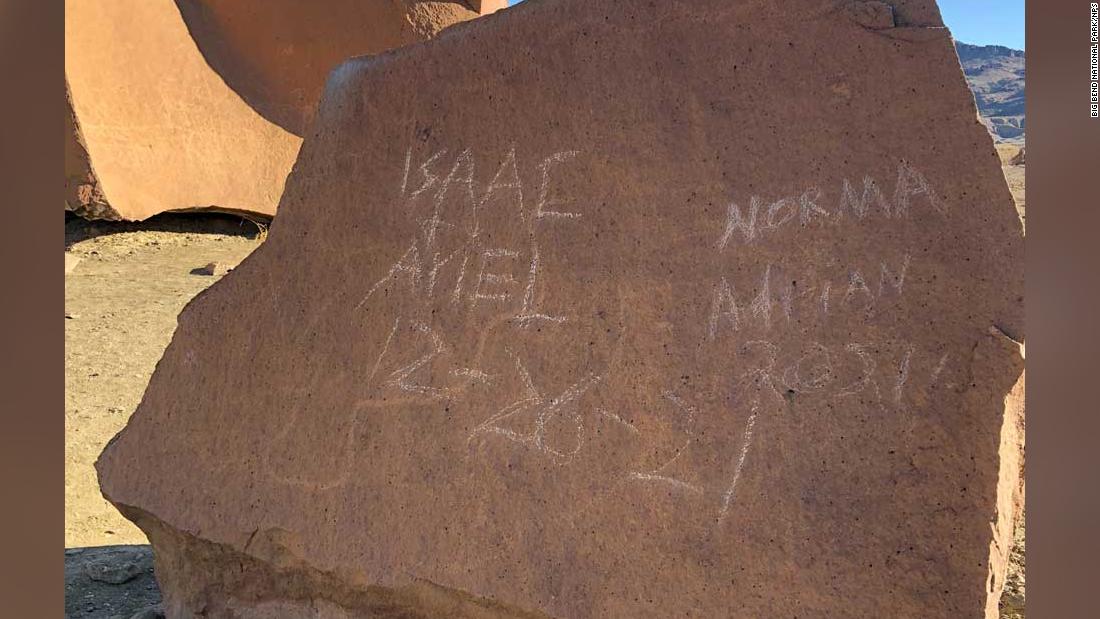 (CNN) — A panel of prehistoric stone artworks, thought to be between 4,000 and 8,500 years old, have been “irreparably damaged” by vandals at Big Bend National Park in Texas, the US National Park Service has said.
The ancient petroglyphs were defaced by visitors who scratched their names and a date into the rock, which is positioned in the Indian Head area of the archaeological site, the park service said in a press release published Tuesday.

The names Norma, Adrian, Isaac and Ariel and the date 12/26/21 are visible in images of the defaced rock.

The Big Bend National Park in Texas is a “prime example” of a Chihuahuan Desert ecosystem.

The panel has since been treated but the damage, which was thought to have been done December 26, is still visible and the stone can’t be restored to its original state, Tom VandenBerg , Big Bend National Park’s chief of interpretation and visitor services, told CNN Friday.

In a press release, the National Park Service said there had been more than 50 instances of illegal vandalism recorded at the park since 2015, and it urged anyone with information to come forward.

“Damaging natural features and rock art destroys the very beauty and history that the American people want to protect in our parks,” Bob Krumenaker, superintendent of Big Bend National Park, said in the release.

“With each instance of vandalism, part of our Nation’s heritage is lost forever,” he said.

VandenBerg told CNN in an email that the graffiti was etched over “abstract images of geometric forms, circles, and undulating lines.”

“The surface scratches and discoloration are permanent,” he said. “Ancient rock art is protected, and links humanity to our past. Every site damaged is a loss to the history and heritage that National Parks protects.”

He said Big Bend National Park, which opened 1944, was of archaeological importance and was a “prime example” of a Chihuahuan Desert ecosystem with a “myriad” of wildlife and specialized plants living alongside 13,000 years of human history.