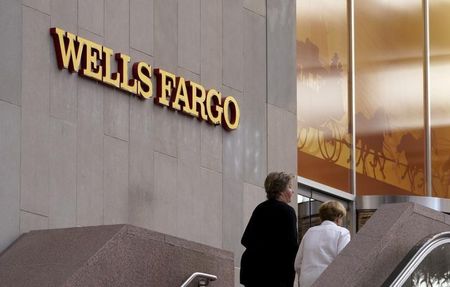 Investing.com – Wells Fargo stock (NYSE:) rose 2.7% on Friday after the lender’s profit and revenue came in ahead of estimates, driven by the CEO’s focus on cutting costs.

Net profit soared 86% to $5.8 billion, aided by a $943 million gain from the sale of the bank’s corporate trust and asset management units. It was also boosted by lower provisioning because of improving credit quality.

According to Reuters, Wells Chief Financial Officer Mike Santomassimo said the bank is aiming for an additional $3.3 billion in cost cuts in 2022, as it attempts to have more consumers bank online while reducing its own real estate presence.

Wells Fargo has been operating under a $1.95 trillion asset cap imposed by the Federal Reserve in 2018, which has limited its ability to boost interest income.

“We also remain cognizant that we still have a multiyear effort to satisfy our regulatory requirements – with setbacks likely to continue along the way – and we continue our work to put exposures related to our historical practices behind us,” Scharf said.

The lender has found itself boxed by the regulators after a sales practices scandal came to light in 2016. It has since paid billions in fines.

Home lending was down 8% primarily due to weaker mortgage banking income driven by lower gain on sale margins and fewer originations. Vehicle loans business did well, revenue rising 17% there.

Loans issued late in the year were up 1% from a year earlier and 4% higher than the prior quarter.

Daily infection in Corona below 5,000 in the state, 14 deaths in one day in North 24 Parganas